Commemorated the 20th anniversary since the 9/11 tragedy. Two users awarded for respecting the memorial.

Blockate's Memorial Day 2021 was a event dedicated to commemorating the 20th anniversary of the 9/11 event. First mentioned and scheduled by SIXFLAGSUS[1], the event began at 1:15 PM (UTC)[2] and took place in the New World Trade Center world created by SIXFLAGSUS. Two users earned the First Memorial Day Honor Award from the event.[3]

Preparations were being done in the New World Trade Center world with some special features added such as the Golden statue of World Trade Center, a speech hall, the World Trade Exhibition as well as text on WTC buildings and at the road. Later that day, the venues for the events were setup.[4]

At 1:15 PM (UTC), SIXFLAGSUS held a memorial speech for the lost victims of 9/11 event. During the speech, the National Anthem of USA played. The speech ended at 1:28 PM (UTC). The speech was recorded by SIXFLAGSUS himself. The first two images of the speech were uploaded to Blockate's Discord Server at 1:52 PM (UTC).

At 3:25 PM (UTC), 2 WTC lightened up with the flag of the United States.[5] At 5:30 PM (UTC), New World Trade Center world received it's temporary night time background. At around 6 PM (UTC), the Memorial day venues were visited by a user named Duk, including the 9/11 Museum building.[3] Later he received the First Memorial Day Honor Award. On September 17th, 2021, a second user, EdSPCH recieved the First Memorial Day Honor Award. He flew a Umbrella to pay respect.[6]

On September 17th, 2021, New WTC was being cleaned up with giant white text being removed and the 9/11 Museum no longer was lightning in blue.[6] On September 18th, 2021 the event was officially over thus ending the Memorial Day Week.

The Golden World Trade Center statue was built to commemorate the 20 years since 9/11 event. It had a sign placed saying 2001-2021 (also the same text is at the 2 WTC building). Near the statue is the speech hall and a tombstone shape memorial plaque.

The 9/11 Memorial Museum was decorated with blue lights on top of it's roof. It will serve as part of the exhibition for the visitors the Memorial Day 2021 event. The museum is the game's main feature built back in 2019 which has a underground museum located near the Memorial pool site.

Players attended a speech about 9/11 memorial at the newly built speech hall which has 20 seats and a maximum capacity of up to 50 players. The hall has the main deck with the planted flag of the United States above it. The deck will be used for performing the speech.

The Memorial Park is the main feature of the New World Trade Center world. It served as the largest venue which contained all the venues in it's range. Players were able to freely explore the park during the Memorial Day 2021 event.

The Golden ball was a fountain of the former World Trade Center. It's remain after the 9/11 had been relocated from the Memorial Park. The Golden ball has been decorated with lights and the flag of the United States.

World Trade Exhibition is specially included in the WFC building and was part of the Memorial Day 2021 event when players explored the WFC complex. The exhibition contains the 2D WTC statue, statues of the date, the Golden Ark and a replica of One WTC.

Throughout the map, large neon text was added to highlight the 20th anniverseray. The text ranged from 2001-2021 to Remember, Never Forget and even Thank You, USA! Later, more neon text lights appeared during the event.

Just like the golden statue, the World Trade Center Hologram is built inside 4 WTC, part of the exhibition. The hologram was built on September 11th, 2021.

SIXFLAGSUS during his Memorial Day speech

Aerial image of the speech

7 WTC with text, Why? Mostly to commemorate the destruction of the original 7 WTC building. 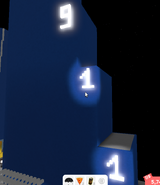 EdSPCH paying respect from the top of One WTC

2 more players that were with EdSPCH

Community content is available under CC-BY-SA unless otherwise noted.
Advertisement