Member of the Blockate group

SIXFLAGSUS is a Blockate player known for his real life showcase world New World Trade Center, which has over 340 visits but amasses over 270,000 blocks. Other worlds include, Robloxity RP, World Map, Gear Battle and Travelholic. His most recent project is the world Sarajevo which currently has over 16,000 blocks (as of 14 September 2021).

He is also known to have documented Blockate's first glitch and even name it as the Summer Crash of 2021. In September 2021, following the 20th anniverseray of 9/11, he decorated his New WTC world with a memorial about the 9/11 and contributed to the wiki by posting images to commemorate the memorial.

SIXFLAGSUS started playing Blockate around September 2018. His first creation is the Robloxity RP world which has over 35K blocks. He played Blockate very often around 2018 and the beginning of 2019. He was seen often in small worlds, contributed, had fun griefing like every other player and so on.

In January 2019, SIXFLAGSUS began his ultimate project on building the real life size New World Trade Center complex which no player has ever actually finished. In about a week, he had finished already most of the buildings and his world had over 100K blocks then. In May 2019 he expanded the project with the World Finance Center complex bringing the block count to over 200K and eventually finished it by the summer of 2019. During 2019 he joined Blockate's Fan group and became a member of the Blockate wiki.

A period of long hiatus followed from 2019 till 2021 when SIXFLAGSUS would rarely visit Blockate to check his worlds. Around June 2021, SIXFLAGSUS returned to Blockate and eventually documented a unexpected but long crash to which he would describe as "The Summer Crash of '21" which was a long four hour glitch which prevented people from joining their own worlds and active worlds. It became the first event in the history of Blockate to involve a glitch. After that, SIXFLAGSUS went offline again.

In September 2021, he returned once again to commemorate the 20th anniverseray since the 9/11 event by decorating his New WTC world with things related to the 9/11 Memorial. Soon after he began working on his new project called "Sarajevo", which is a upcoming showcase game. 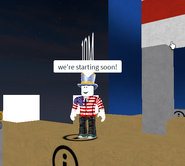 SIXFLAGSUS during starting the 9/11 Memorial

SIXFLAGSUS' highway simulator game which he began in summer of 2021. Now officially cancelled

SIXFLAGSUS during the Summer Crash of 2021

SIXFLAGSUS documenting the spam campaign where people were forced to leave because Blockate's servers were down.